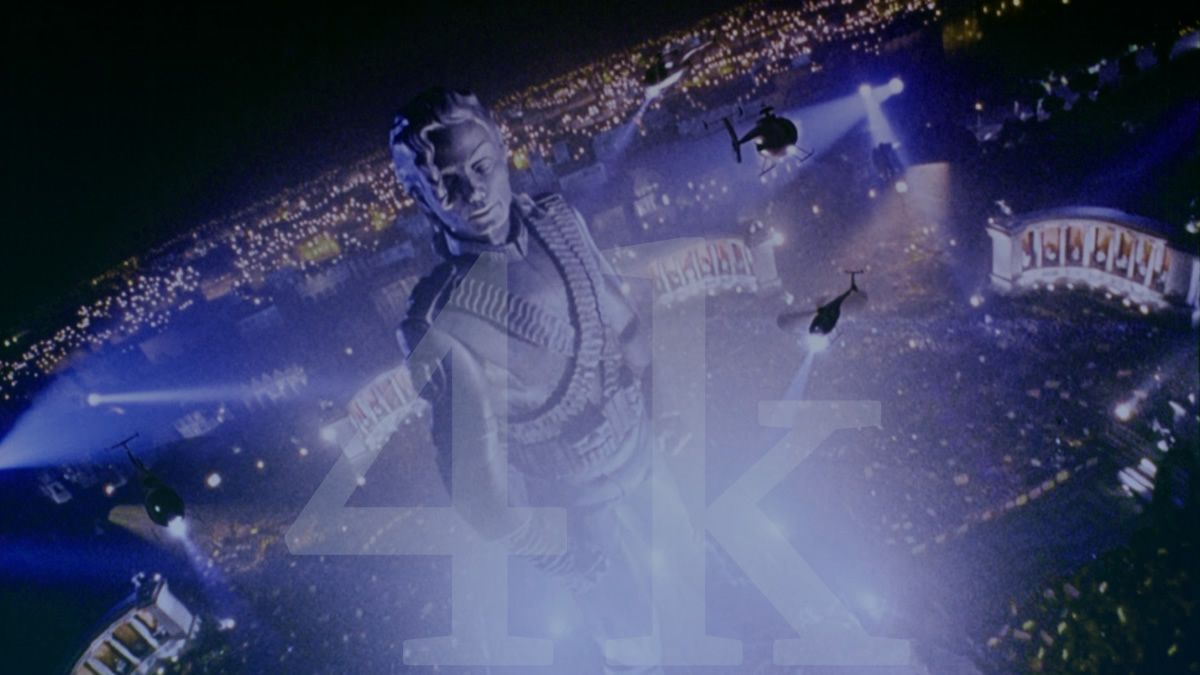 Actual shot from 4k rendered video. Image slightly colour graded and manipulated by us for publication.

You may have seen some buzz in the last few days surrounding a French vlogger who happens to be a -huge- MJ fan. Recently, he published a video (all in French, but with some English subtitles) that details his adventure in scanning a 35mm film of the HIStory Teaser into 4k high-res video. 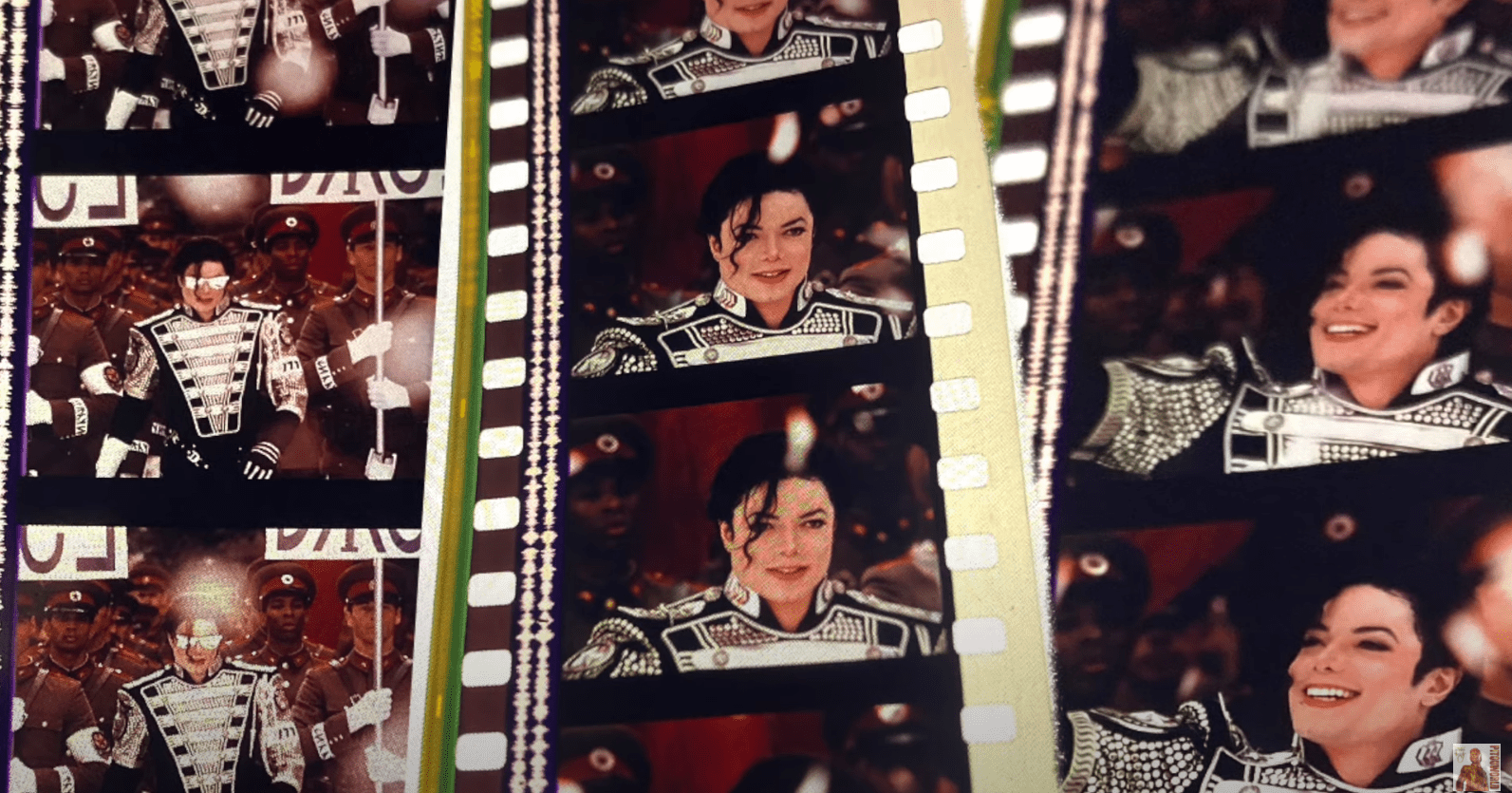 PITOU GOES THROUGH THE PROCESS STEP BY STEP

Pitou explains - The version I have in my possession has not been seen in the past 25 years - let me tell you why. This version for some reason has more elements than you'd find on any other media such as DVDs, VHS, laserdisc and popular YouTube uploads.

This version is the one that was used for a limited time in cinemas way back when.

The sound extracted from this film sounds way larger and more precise than I've heard before.


WE INTERVIEW PITOU ABOUT HIS WORK, BEING A FAN AND THE FUTURE

How long have you been a fan?
I have been a fan since I remember, but it was around the dangerous era. I was still very young and was not sure was Michael was all about, but I could already feel his magic and each time I saw him on tv or heard his music on the radio I felt magnetic. My first real memory was seeing the Dangerous concert on TF1, which is a big tv channel in France.

I sense your favourite era is HIStory? Is this correct, and if so - any particular elements?
Yes, history is my favourite era, because by then I was old enough to understand the power of his music and videos. So I got to experience all the promotion around that album, but I was still too young to attend concerts. So my dad bought me the album when it came out and I listened to it every day after school and was amazed by how great the album was. That was my hobby at the time, to learn all the moves from the music video and one I really enjoyed was the performance at the MTV music award when he performed Dangerous that you could only find on the VHS at the time. And also that history film is one of my favourites of Michael! At the time I had to buy a second time the history VHS because I watched it so much that it was starting to deteriorate by rewinding it so much.

How long have you owned the 35mm HIStory Trailer reels?
I have had it for a few years now, and always wanted to scan it, but didn’t have the finance to do it at the time. So for a few years, I always put some money aside for this special project. And that's why it was important to me that I could share it with the community, I think every MJ Fan should be able to see this version in 4K.

The quality is superior - it's very very exciting. Do you plan to upload the full version from start to finish in 4k? If so - also for download?
I planned to premiere the 4K version on youtube a few days after the vlog so that everyone could enjoy it, but a few members of my team suggested that I first make contact with Sony or the estate to do it the right way and have an official upload on MJ Channel. Because the one right now on Michael’s youtube page is in 480p so I think it’s time that they upgrade it so fans can experience it the right way.

Do you have any other reals or content in 4k, if so - what are they?
Yes, I do. And I would love to share them very soon also. I have the Dangerous David Lynch Teaser in 4K, A commercial of Pepsi from the Bad era (The one with James Safechuck at the beginning, maybe I will edit him out of the final version haha), this one is not a 4K but a great HD, Also the Teaser of moonwalker that I present in my first video but that one is more common to find and last but not least I recently got the full 70mm movie of Captain EO.

Where in France do you live? I have great adoration for French MJ fans. Their collections are great.
I live in France in the southeast near Suissland! And we have some great collectors here and they also do a wonderful job with their youtube videos, if I can give a shout out to Hector Barjot, Christophe Jackson, Shamone MJ collection, Salut Les fans, Camille from moonwalk girls, and many more. They all have amazing videos!

At the end of the video, you have a Captain EO cup. Nice! Seeing Captain EO in 4k would be great! Although I imagine this would be down to Disney?
Yes, I am working on the full scan of Captain EO, and the idea is to get the 6K version out of the 70mm film. But this one will be tricky to share as there are many third parties involved ( Disney, Sony, estate, Lucas Film) But at least there will be a version of it and maybe one day it will be possible to share. I will vlog the journey as I did for the history one, so at least fans can have a sneak peek without me breaking the ownership rights.

I wonder if GHOSTS reels exist from Cannes?
Funny you mentioned, because that is the subject of my next video. And I will show Some very exclusive collectors there. And yes I am looking for Ghosts reels, and they do exist But who has them? I will also try and get some people who work on the Ghosts to talk about their experience on the movie set and give us some fun facts

CHECK OUT THE VIDEO

How I Scanned The 35mm HIStory FILM

Pitou also shares his design of the HIStory statue poster - check out the link here - MyAirBridge.com | Send or share big files up to 20 GiB for free


Thank you so, so much for helping us out with this one, Quentin. We really appreciate you.

This is so amazing! 4k MJ content. It's what's been needed for a long time. It just shows you, that a little (a lot) of effort can go a long way. Fans are doing this - Why has it taken the Estate/Sony this long? Thriller 4k granted, was - and is amazing (for those lucky enough to have seen it) - but where has it gone? Thin air - that's where. MJ and his artistry, his talent and vision deserves to be out there in the spotlight - in the best quality available. A 480p grainy video isn't it! Captain EO? Wow. Just wow. I can't wait. Excited!

Great interview Greg, thank you I've bookmarked the video for later.
Interesting that he's contacted the estate. Any indication they'll use and upload it?

d49k said:
Great interview Greg, thank you I've bookmarked the video for later.
Interesting that he's contacted the estate. Any indication they'll use and upload it?
Click to expand...

Nothing as yet - I believe he's already been in contact with Sony. I'll invite him here tomorrow to share any news he gets It's unusual I'm this excited for something MJ related, but we're so close to something that we should already have. I don't 'buy' the whole excuse the Estate gave years ago in regards to upgrading the back catalogue of short films.

Very exciting! The fact that so many artists (both legacy and current) have had their music videos upgraded to 4K and yet Michael Jacksons are still in 480p is ridicolous, seeing Ghosts in 4K would be incredible - especially it it's ever given a cinema release like Thriller.